It’s the weekend of Feb. 17-18, 2018, President’s Day weekend in the U.S. Literary birthdays of note today and tomorrow include writers Toni Morrison and Margaret Truman. And poet birthdays this weekend include William Bronk and Audre Lorde. Our poem for this weekend is George Douglas Johnson’s, “The Heart of a Woman.” Thank you for reading. Have a wonderful weekend.

Morrison was a college English professor and book editor when her first novel, “The Bluest Eye,” published in 1970. It’s about an African-American girl who wants blue eyes so she can feel as if she belongs in America. The book wasn’t a major commercial success, but it was well-received by critics. 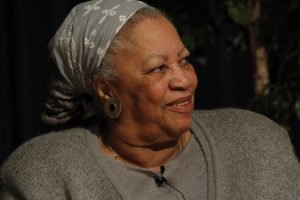 Then, after a second novel, “Sula,” Morrison published “Song of Solomon.” It’s a coming-of-age story told by the book’s main character, Milkman Dead.

“Song of Solomon” brought Morrison national recognition. It won the National Book Critics Circle Award. And the novel catapulted onto bestseller lists when Oprah Winfrey added it to her Book Club in 1996.

But the novel for which Morrison may be most known is “Beloved.” It’s about a former slave who’s haunted by the baby she killed. “Beloved” published in 1987 and won the 1988 Pulitzer Prize for Fiction. A movie based on the book, starring Winfrey and Danny Glover, released in 1998.

Morrison’s work probes the black American experience, often from within the black community. She’s published more than 20 books. Most are novels.

Today is the birthday of Margaret Truman (affiliate link), born in 1924 in Independence, MO. She was the daughter of President Harry S. Truman and his wife, Bess.

Truman embarked on a singing career after graduating from George Washington University in 1946. She performed on the radio and toured, including a performance before 20,000 people at the Hollywood Bowl.

In the 1950s, though, Truman transitioned from singing to broadcasting. She filled in for Edward R. Murrow on “Person to Person,” interviewing her parents, in 1955. And in 1966 she hosted “Authors in the News,” a radio program of five-minute interviews with prominent authors.

Truman herself became an author first with her memoirs, “Souvenir,” in 1956. But it was in crime writing that Truman would make her most significant literary mark.

The book ended up being the first of 23 mystery novels in Truman’s “Capital Crime” series. Each book is set in Washington, DC, and have titles beginning with the word, “Murder.”

Truman’s final novel is “Murder Inside the Beltway.” It published in 2008, the year she passed away.

And today is the birthday of poet William Bronk (affiliate link). He was born in Fort Edward, NY, in 1918.

Some describe Bronk as one of the most underappreciated poets in the U.S. He often wrote about metaphysical topics, probing the nature of consciousness and time and space. For example, in “Metonymy as an Approach to a Real World,” he wrote:

Once in a city blocked and filled, I saw
the light lie in the deep chasm of a street,
palpable and blue, as though it had drifted in
from say, the sea, a purity of space.

Bronk published at least 28 books. His first poetry collection, “Light and Dark,” came out in 1956. And his volume “Life Supports” won the 1982 National Book Award for Poetry.

Along with writing poetry and the occasional essay, Bronk ran a family business he inherited, the William M. Bronk Coal and Lumber Company. And he lived in the house in which he grew up in Hudson Falls, NY, until his death in 1999.

Tomorrow is the birthday of poet Audre Lorde (affiliate link), born in 1934 in New York City.

Lorde’s parents were immigrants from Granada. She grew up in New York. She was still in high school when her first published poem appeared in Seventeen magazine. 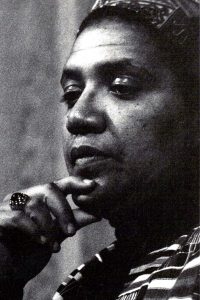 After college and graduate school, Lorde worked as a librarian in New York public schools.

In 1968, her first poetry collection, “The First Cities,” came out. That year, she also received a National Endowment for the Arts grant. And she moved to Mississippi to become the writer-in-residence at Tougaloo College.

From there she published 1970’s “Cables to Rage” and “From a Land Where Other People Live” in 1973. The latter book was a National Book Award nominee. And it also indicated a change in Lorde’s work.

Until this point, Lorde’s poetry tended to be about subjects such as love and betrayal. But “From a Land Where Other People Live” also touched on global oppression and injustice.

Then in 1974, Lorde released “New York Head Shot and Museum.” In this collection, Lorde lets loose about what it’s like to be a woman and mother and black in New York City.

Lorde added prose to her body of work in 1981 with “The Cancer Journals.” The book documents her first bout with breast cancer.

Also in the 1980s, she and writer Barbara Smith founded Kitchen Table: Women of Color Press to support black feminist writers. And Lorde was a founding member of an organization that raised concerns about women under apartheid in South Africa.

Lorde died of liver cancer in 1992. About her legacy, she said, “What I leave behind has a life of its own. I’ve said this about poetry. I’ve said it about children. Well, in a sense I’m saying it about the very artifact of who I have been.”

“The Heart of a Woman”

The heart of a woman goes forth with the dawn,

As a lone bird, soft winging, so restlessly on,

Afar o’er life’s turrets and vales does it roam

In the wake of those echoes the heart calls home.

The heart of a woman falls back with the night,

And enters some alien cage in its plight,

And tries to forget it has dreamed of the stars