Today is Friday, Feb. 23, 2018. Birthdays of today include W. E. B. Du Bois, Mary Francis Shura, William L. Shirer, and George Frideric Handel. And today in 1945, U.S. Marines raised the American flag atop a mountain in Iwo Jima. Today’s poem is Emily Dickinson’s “Knows How to Forget!” Thank you for reading Bidwell Hollow. Have a great Friday. 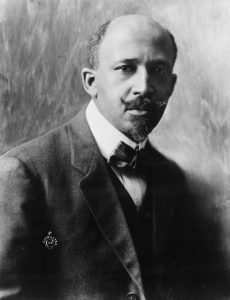 Du Bois held degrees from Fisk University and Harvard. He taught at Atlanta University in Georgia from 1897 to 1914.

There Du Bois produced several books and academic publications. And he also developed a sense of activism that would drive the rest of his life.

In 1909, Du Bois helped found the National Association for the Advancement of Colored People (NAACP). And for 24 years he ran the organization’s monthly magazine, The Crisis. The periodical published such African American writers as Langston Hughes, Jean Toomer, and Claude McKay.

After leaving the NAACP for 10 years, Du Bois returned in 1944. Three years later he wrote on behalf of the NAACP “An Appeal to the World.” The document changed the plight of African Americans from an issue of civil rights to human rights. And it called on the United Nations to redress human rights violations committed in the U.S. toward African Americans.

In his later years, Du Bois grew disillusioned with the United States. He moved to Ghana in 1961, becoming a Ghanaian citizen in 1963, the year he died.

Throughout his life, Du Bois published many books, including a trilogy of novels. The trilogy, titled “The Black Flame,” published between 1957 and 1961.

And it’s the birthday of Mary Francis Shura Craig (affiliate link), born in Pratte, KS, in 1923.

Craig produced 69 books and over 250 short stories. She wrote in many genres, including romance, suspense, mystery, and children’s literature. And she published under different pen names, such as Mary Francis Shura, M. S. Craig, and Alexis Hill.

In 1990, the year before she died, Craig was elected president of the Mystery Writers of America. Other past presidents include Mary Higgins Clark, Harlan Coben, and Sue Grafton.

Today is also the birthday of journalist and historian William L. Shirer (affiliate link). He was born in 1904 in Chicago.

Shirer headed to Europe after college. He became The Chicago Tribune’s European correspondent in 1927.

In 1935, Shirer moved to Berlin to serve as a correspondent for the Universal News Service. He highlighted Nazi Germany’s anti-semitism in his reporting from the 1936 Berlin Olympics. The criticism angered the Nazis, who threatened to expel Shirer from the country.

Instead, in 1937, Shirer accepted an offer from Edward R. Murrow to become a CBS correspondent in Vienna. Throughout the 1930s, Shirer reported on the rise of fascism in Europe and the start of World War II. He published his observations in the book, “Berlin Diary: The Journal of a Foreign Correspondent, 1934-1941.”

Shirer continued his broadcasting career after the war. He won a Peabody Award in 1946 for “Outstanding Reporting and Interpretation of the News.”

But Shirer was viewed as a Communist sympathizer during the 1950s Red Scare. He was blacklisted, and his broadcasting career ended.

So Shirer turned to writing. He published mostly non-fiction books. Including 1960’s “The Rise and Fall of the Third Reich.” It documents, from Shirer’s perspective, the ascent and destruction of Nazi Germany.

The book became a best seller. It won the 1961 National Book Award for Nonfiction.

“The Rise and Fall of the Third Reich” remains Shirer’s best-known book. Some argue, though, that Shirer oversimplifies 1930s-1940s Germany. Critics say Shirer’s eagerness to blame all Germans for World War II and the Holocaust obscures what may be a more accurate approach to history.

Along with “The Rise and Fall of the Third Reich,” Shirer published other works of non-fiction, for adults and young adults. He passed away in 1993.

Also born today, in Halle, Germany, in 1685, was the composer George Frideric Handel. 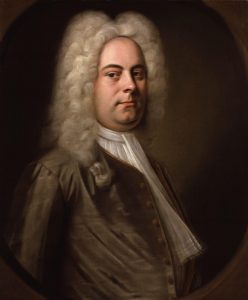 Handel took his musical talents to England in 1710. The following year his opera, “Rinaldo,” received such a warm welcome that Handel decided to stay in London.

In 1713, Handel’s “Ode for the Queen’s Birthday” impressed England’s Queen Anne so much that she put Handel on retainer. The composer spent the rest of his life in England. He became a British subject in 1727.

Handel composed many instrumental compositions, operas, and oratorios. One such oratorio is “Messiah,” which features the famed “Hallelujah Chorus.”

Written as an Easter production, “Messiah” was first performed in Dublin on April 13, 1742. Today it’s more associated with Christmas.

Today is the 73rd anniversary of the American flag raising on the Japanese island of Iwo Jima during World War II. 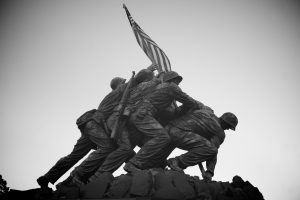 But the flag wasn’t large enough to be visible from all parts of the island.

So six Marines went atop Suribachi to plant a second, larger flag. Associated Press photographer Joe Rosenthal took a now-famous photo of the flag raising. The picture remains one of the most recognizable American war photos of all time.

“Knows How to Forget!”

Knows how to forget!

But could It teach it?

Easiest of Arts, they say

When one learn how

Is common, though, now —

I went to School

But was not wiser

Globe did not teach it

Ah, to be erudite

If it be invention

It must have a Patent.

Rabbi of the Wise Book