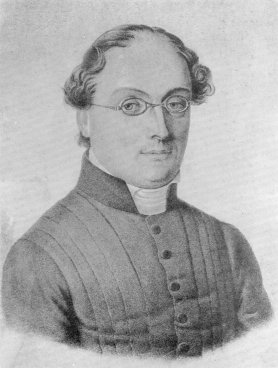 Today is Monday, Feb. 5, 2018. It’s the birthday of writers William S. Burroughs, Susan Hill, and Elizabeth Swados. And on this date Reader’s Digest published its first issue in 1922. Our poem for today is Robert Frost’s “An Old Man’s Winter Night.” Thank you for reading, listening to, and sharing Bidwell Hollow.

Today is J. L. Runeberg Day in Finland. The holiday celebrates the birthday of poet Johan Ludvig Runeberg. He was born in 1804 in what is now Pietarsaari, Finland.

The poet also enjoyed a small pastry his wife made, now called the Runeberg torte or cupcake. Recipes vary, but it’s a muffin cup flavored with almonds and alcohol, usually rum. The cup is filled with a sugar syrup and topped with raspberry jam.

It’s the birthday of writer William S. Burroughs (affiliate link). He was born in St. Louis, MO in 1914.

Burroughs was a member of the Beat Generation, a group of writers that included Allen Ginsberg, Jack Kerouac, and Burroughs. 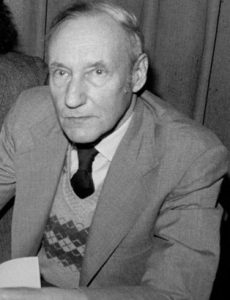 Burroughs struggled with drug addiction through most of his early adult years. He wrote about this in his first book, “Junkie: Confessions of an Unredeemed Drug Addict,” in 1953. The author broke his addiction when he was 45.

After receiving treatment for drug addiction, Burroughs wrote the novel for which he’s most known: “Naked Lunch.” The book is plotless and contains a series of essays, or vignettes, written from the perspective of a drug addict named William Lee. “Naked Lunch” received large amounts of praise and criticism from critics when it published.

The title, “Naked Lunch,” came from a misunderstanding. In the book’s manuscript, Burroughs had made a handwritten notation that read “naked lust.” Ginsberg misread the notation as “naked lunch,” which Kerouac suggested would make a good title for a novel.

On this date in 1922, a magazine summarizing other magazines’ articles published its first issue. That magazine was Reader’s Digest. 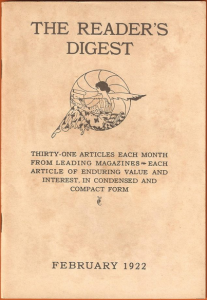 DeWitt Wallace founded Reader’s Digest. He suspected early 20th-century Americans were overloaded with information coming at them. So Wallace thought a monthly publication that aggregated that information would succeed.

And Wallace’s wife, Lila, thought the magazine would be popular among housewives “and newly liberated working girls.”

DeWitt and Lila mailed five thousand copies of Reader’s Digest’s first issue to subscribers. The Wallaces stuffed the magazines into envelopes themselves. They considered the first issue a success when no one canceled their subscription.

DeWitt and Lila Wallace received the Presidential Medal of Freedom from President Richard Nixon in 1972.

And born today in 1942 near the North Sea in Yorkshire, England, was writer Susan Hill (affiliate link).

She’s published 56 books, including 1983’s “The Woman in Black.” It’s a ghost story set in Victorian-era England. It’s the first ghost story written by Hill. A play based on the book premiered in 1987. It’s currently the fourth-longest running production in London’s West End theater district. And a movie version of “The Woman in Black,” starring Daniel Radcliffe, debuted in 2012.

Along with ghost stories, Hill’s writing includes children’s books, crime novels, and literary fiction. Her most recent book is “From the Heart,” published in 2017.

It’s also the birthday of playwright and writer Elizabeth Swados (affiliate link), born in 1951 in Buffalo, NY. She may be best known for her 1978 musical “Runaways.” The show earned her four Tony nominations.

“Runaways” is about runaway teenagers. It’s based on interviews Swados conducted with troubled teens and their families. Swados cast in “Runaways” many of the teens she interviewed.

Swados also collaborated with cartoonist Gary Trudeau on productions in the early 1980s. One such collaboration was “Doonesbury,” inspired by Trudeau’s popular cartoon of the same name. And the other was a political satire of the Reagan Administration titled “Rap Master Ronnie.”

Known for experimenting with musical compositions, Swados incorporated musical genres and even animal calls in her theatrical work. Some of her other productions include “The Haggadah, a Passover Cantata” and “Lullaby and Goodnight.”

Swados also wrote three novels, seven children’s books, and a picture book about her struggle with depression. She adapted the book into an animated film that aired on HBO in 2016 titled “My Depression (The Up and Down and Up of It).”

All out of doors looked darkly in at him

Through the thin frost, almost in separate stars,

That gathers on the pane in empty rooms.

What kept his eyes from giving back the gaze

Was the lamp tilted near them in his hand.

What kept him from remembering what it was

That brought him to that creaking room was age.

He stood with barrels round him—at a loss.

And having scared the cellar under him

In clomping there, he scared it once again

Of trees and crack of branches, common things,

A light he was to no one but himself

Where now he sat, concerned with he knew what,

A quiet light, and then not even that.

He consigned to the moon,—such as she was,

So late-arising,—to the broken moon

As better than the sun in any case

For such a charge, his snow upon the roof,

His icicles along the wall to keep;

And slept. The log that shifted with a jolt

Once in the stove, disturbed him and he shifted,

And eased his heavy breathing, but still slept.

A farm, a countryside, or if he can,

It’s thus he does it of a winter night.