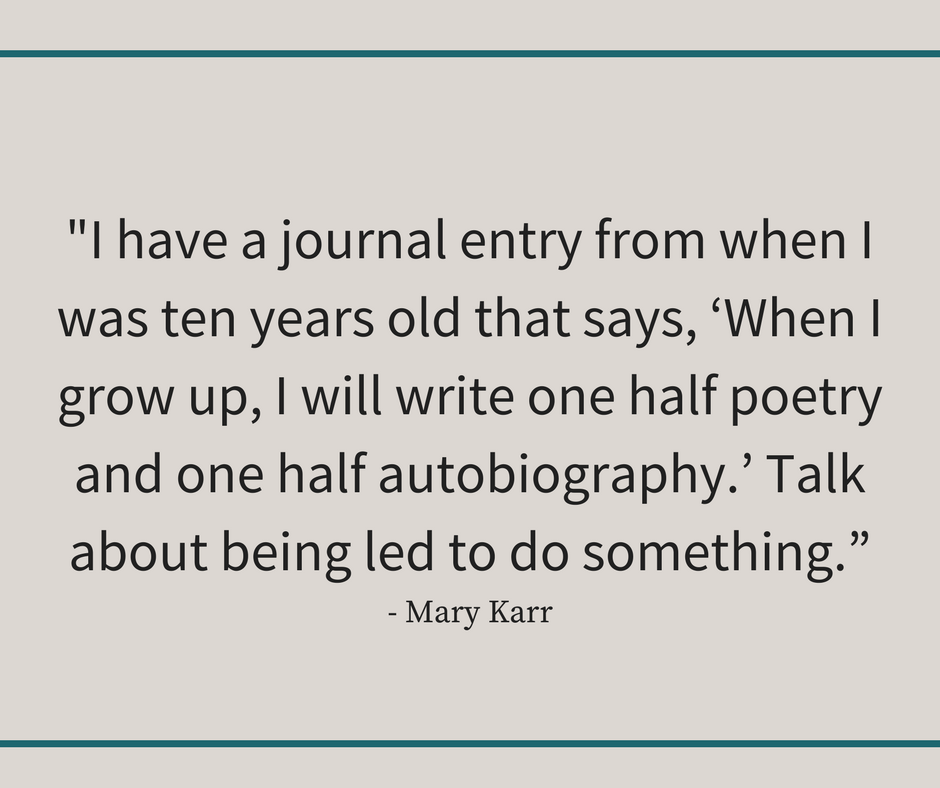 Today’s Tuesday, Jan. 16, 2018. It’s the birthday of Mary Karr, composer and playwright Lin-Manuel Miranda, and author Craig Johnson. Our poem today is Florence Ripley Mastin’s “Night Fell.” You’ll find the poem and an audio version of this post below. Thank you for reading, listening, and sharing.

It’s the birthday of poet and memoirist Mary Karr (affiliate link), born in 1955 in Groves, TX. She’s the author of four poetry collections and a trilogy of memoirs. 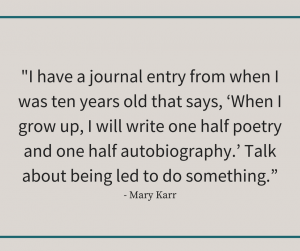 Karr grew up in the East Texas town of Leechfield. Her alcoholic father worked at an oil refinery. And her mother suffered from mental health problems. This background served as the setting for the first of Karr’s memoirs, “The Liar’s Club” (1995). The book covers he life from 1961-1963. It spent more than a year on the NY Times bestseller list.

Karr continued her story with 2001’s “Cherry” and she completed the trilogy with “Lit” in 2009. Both books were NY Times bestsellers. A Showtime miniseries based on the memoirs is in the works. Actress Mary-Louise Parker is set to play Karr’s mother.

During her troubled childhood Karr found refuge in reading. “Books eased a prickly reality for me,” she said.

It was in grade school that she memorized Langston Hughes poems and T. S. Eliot’s “The Love Song of J. Alfred Prufrok.” And she credits Maya Angelou’s “I Know Why the Caged Bird Sings” for helping her become the writer she is today.

“Maybe because she survived a childhood rape to become that most exalted of creatures: a writer,” Karr said.

On writing about pain, Karr said, “I think the writing is just honoring what your suffering is, trying to occupy it as you did when it was happening.”

Karr is an English professor at Syracuse University. She once taught a class titled Dead White Guys. It focused on the poetry of Eliot, W. B. Yeats, Wallace Stevens, and Ezra Pound.

One of her colleagues at Syracuse is bestselling-author George Saunders. Both are hosting a storytelling salon this July in Patmos, Greece.

About writing memoirs that include living people, Karr said, “I tell people in advance. I call people up and say look, ‘I want to write about growing up. It’ll mostly be about me. Here are the things I’m gonna write about that might make you uncomfortable. I lost my virginity at your mother’s house; if I write that, your mother might be upset.’ Stuff like that.”

Miranda is best known for creating “Hamilton,” a musical about Alexander Hamilton.

The musical is the most Tony Award-nominated musical in history. “Hamilton” won 11 Tony Awards in 2016, including a Best Original Score Award for Miranda. The television broadcast for those Tony Awards was the most-watched Tony Award ceremony since 2001.

“Hamilton” received the 2016 Pulitzer Prize in Drama. The musical’s album reached Triple Platinum status. And it won the 2016 Billboard Music Award for Top Soundtrack/Cast Album, the first musical to do so.

A Broadway revival of “Hello, Dolly!” opened in April 2017. It starred Bette Midler playing the character Dolly Levi. For her performance, Midler won the 2017 Tony Award for Best Lead Actress in a Musical.

And today’s the birthday of the writer of books about a Wyoming sheriff named Walt Longmire. That’s Craig Johnson (affiliate link), born in Huntington, WV in 1961.

Johnson was living in New York City when he moved to Wyoming in 1992. He bought some land and began building a log cabin home. During construction, he wrote the first two chapters of a novel, but he then put them in a desk drawer.

It was twelve years before Johnson took the unfinished work out of the drawer. That manuscript became his first novel, “The Cold Dish.” The book introduces to the world Longmire, sheriff of the fictional Absaroka County, WY. It published in 2004.

Johnson earned a $25,000 advance for “The Cold Dish.” He’s since published 10 more Walt Longmire novels. And his Longmire mysteries are the basis for the Netflix show, “Longmire.”

Today Johnson has a writing desk without any drawers. Recalling the years his novel sat in a desk drawer, he said, “Drawers are places where you can write novels and hide them. Drawers, that’s where the great American novel goes to die.”

And on this date in 27 B.C. the Roman Senate confers the title of Augustus on Gaius Julius Caesar Octavianus. Most historians view the moment as the beginning of the Roman Empire.

Augustus Julius ruled for 40 years. He nearly doubled the size of the Empire. And he implemented reforms that kicked-off Pax Romana, a period of peace that lasted until 180 C.E.

He had been writing steadily.

Among these dusky walls of books,

How bright he looked, intense as flame!

The firelight in his hair,

I took his hand;

We watched the logs burn out;

The apple boughs fingered the window;

Down the cool, spring night

A slim, white moon leaned to the hill.

To-night the trees are budded white,

And the same pale moon slips through the dusk.

I wonder if he sleeps in woods

Where there are leaves?

Or if he lies in some black trench,

His hands, his kind hands, kindling flame that kills?

He is here now, to bid me last good-night?