Today is Thursday, Jan. 18, 2018, the anniversary of the first Warsaw ghetto uprising. It’s the birthday of writers A. A. Milne and Sol Yurick. And it’s the birthday of poets Jon Stallworthy and Jorge Guillén. Our poem today is Sara Teasdale’s “A Winter Blue Jay.” You’ll find that poem and this post’s podcast below. Thank you for reading and listening.

On this date in 1943 the Jews of Warsaw, Poland fought back against the Nazis. 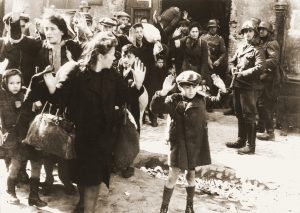 From July to September 1942, Nazis deported about 300,000 Jews from the Warsaw ghetto to the Treblinka extermination camp.

During a pause in the deportations, a group of young Jews formed the Jewish Fighting Organization. They connected with Polish resistance fighters to get weapons and training.

The Jewish Fighting Organization ambushed the Nazis when they returned to resume deportations on Jan. 18, 1943. The Nazis retreated before returning to suppress the uprising two days later. As retribution, the Germans massacred about 1,000 Jews in the ghetto’s main square.

The event’s called the first Warsaw ghetto uprising because, in April 1943, the Jewish Fighting Organization rose again to reclaim the ghetto. They held out for a month before the Nazis destroyed the ghetto.

Today is the birthday of A. A. Milne (affiliate link), the creator of Winnie-the-Pooh.

Milne was born in London in 1882. He worked as a freelance writer in London before serving in World War I. After the war, Milne wrote a few comedic plays and a novel, “The Red House Mystery” (1922).

In 1924, Milne published a collection of poems he wrote for his son, Christopher Robin Milne. He titled the collection “When We Were Very Young.” It contained a poem referencing a teddy bear owned by Christopher named Winnie-the-Pooh. 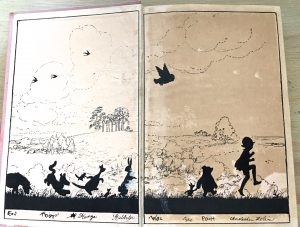 Milne followed the success of his poetry collection with “Winnie-the-Pooh” in 1926. The book was a hit. In the U.S. alone, the first volume sold 150,000 copies within its first month.

The final Winnie-the-Pooh book, “The House at Pooh Corner,” published in 1928. The character Christopher Robin, based on Milne’s son, appears in all three Pooh books.

A Latin version of “Winnie-the-Pooh,” “Winnie Ille Pu,” released in 1960. It remained a New York Times bestseller for 20 consecutive weeks. It remains the only book in Latin to ever make the list.

During his lifetime, Milne’s Winnie-the-Pooh books sold about 7 million copies. But in his 1939 autobiography, “It’s Too Late Now,” Milne lamented that his children’s books overshadowed his other work.

But two years before he died in 1998, the real Christopher Robin said about the Pooh books, “It’s been something of a love-hate relationship down the years, but it’s all right now…I’m quite fond of them really.”

Guillén had been writing poetry for nine years when he published his first collection, “Cántico,” in 1928. This put Guillén in a group of fellow Spanish poets called the Generation of 1927. The name stems from many of these poets, such as Guillén and Luis Cernuda, publishing significant works in or around 1927.

Guillén fled Francisco Franco’s Spain in 1928. He taught English at Wellesley College in Massachusetts from 1940-1957. Over the years, he published more poetry collections, including three expanded editions of “Cántico.”

In 1976, the year after Franco’s death, Spain awarded Guillén the Miguel de Cervantes Prize. This is Spain’s highest literary honor. Guillén returned to Spain in 1977, where he lived until his death in 1984.

And today is the birthday of novelist Sol Yurick (affiliate link), born in 1925 in New York City.

“The Warriors,” published in 1965, was Yurick’s first novel. The book tells the story of gang violence in New York City. Twenty-seven publishers rejected Yurick’s manuscript before E. P. Dutton printed the book. A movie based on “The Warriors” released in 1979.

Among Yurick’s books is a 1973 anthology called “Voices of Brooklyn.” The Brooklyn Public Library sponsored the project. The book included unpublished Brooklyn writers.

It’s also the birthday of Jon Stallworthy (affiliate link), born in London in 1935. Early in life, he knew he wanted to be a poet, and a poet he became. 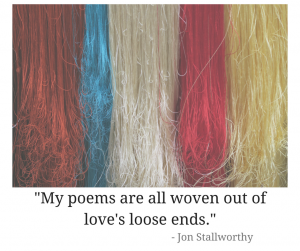 Stallworthy grew up in Oxford, England. His father was a professor of gynecology and obstetrics. And his mother, Peggy, exposed a young Stallworthy to poetry by singing him nursery rhymes.

Stallworthy published his first collection of poetry in 1961 (“The Astronomy of Love”).

As a masters student at the University of Oxford, two professors encouraged Stallworthy to study the poetry of W. B. Yeats. Stallworthy did, publishing his work in 1963 as “Between the Lines: WB Yeats’s Poetry in the Making.”

Along with writing poetry, Stallworthy produced a biography of the poet Wilfred Owen. The book was well-received. Graham Greene called it, “one of the finest biographies of our time.” The biography, “Wilfred Owen,” received awards such as the Duff Cooper Memorial Prize and the E. M. Forster Award of the American Academy of Arts and Letters.

Stallworthy taught at Cornell University in the U.S. from 1977-1986. He returned to Oxford, serving as the poetry editor for the Oxford University Press.

About his poetry, Jon Stallworthy said, “My poems all are woven out of love’s loose ends.”

Crisply the bright snow whispered,
Crunching beneath our feet;
Behind us as we walked along the parkway,
Our shadows danced,
Fantastic shapes in vivid blue.
Across the lake the skaters
Flew to and fro,
With sharp turns weaving
A frail invisible net.
In ecstasy the earth
Drank the silver sunlight;
In ecstasy the skaters
Drank the wine of speed;
In ecstasy we laughed
Drinking the wine of love.
Had not the music of our joy
Sounded its highest note?
But no,
For suddenly, with lifted eyes you said,
“Oh look!”
There, on the black bough of a snow flecked maple,
Fearless and gay as our love,
A bluejay cocked his crest!
Oh who can tell the range of joy
Or set the bounds of beauty?