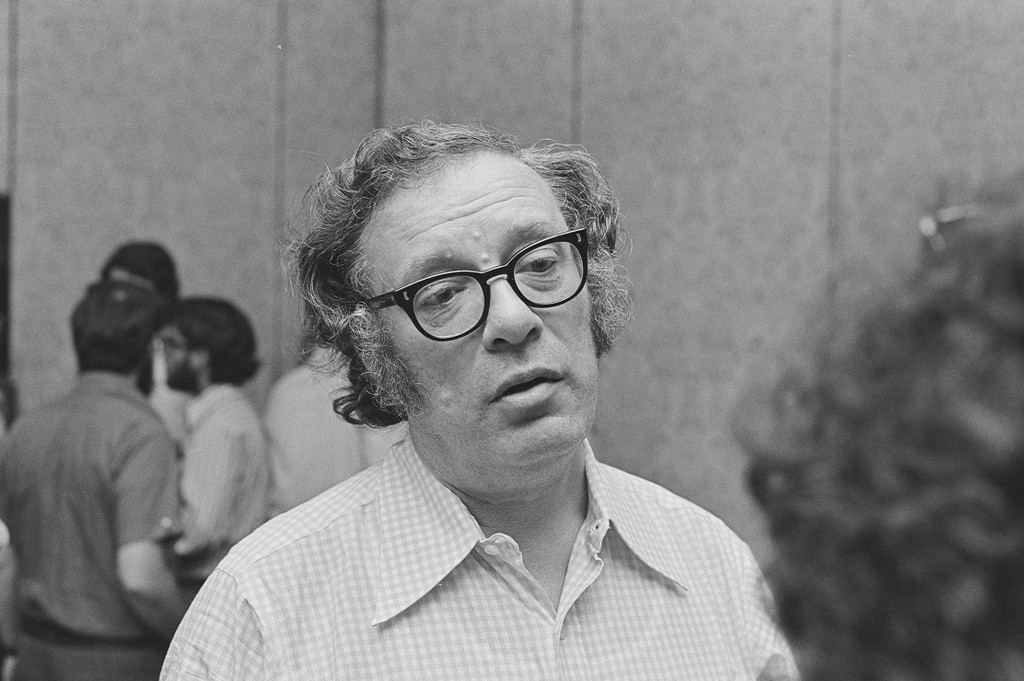 My wife’s new pink slippers
have gay pom-poms.
There is not a spot or a stain
on their satin toes or their sides.
All night they lie together
under her bed’s edge.
Shivering I catch sight of them
and smile, in the morning.
Later I watch them
descending the stair,
hurrying through the doors
and round the table,
moving stiffly
with a shake of their gay pom-poms!
And I talk to them
in my secret mind
out of pure happiness.

Jan. 2 is National Science Fiction Day (NSFD), chosen as such because it’s the birthday of Isaac Asimov. 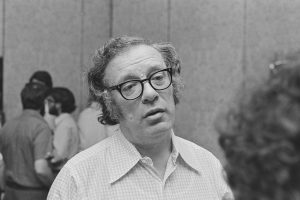 Or, rather, it’s believed to be Asimov’s birth date. Records for Russian Jews in those days were not exact, but Jan. 2 is the day Asimov celebrated his birthday.

Asimov came to the U.S. with his family in 1923. They changed their surname from Ozimov to Asimov and settled in Brooklyn. There Asimov’s father ran a candy store.

Asimov showed promise early on, teaching himself to read at age five and graduating high school at 15. He went on to earn a bachelor’s degree, a master’s degree, and a Ph.D. from Columbia University.

In 1938, Amazing Stories Magazine ran Asimov’s first published work, “Marooned Off Vesta.” He had 14 of his stories published by early 1941. Then he sent another story, “Nightfall,” to the editor John W. Campbell at Astounding Science Fiction magazine.

Campbell sent a letter back to Asimov that concluded, “I am planning to take the story, but there are some parts of it which need changing. The ending is very good, but the beginning is slow.”

Asimov went on to publish about 500 books, including some outside of science fiction. He passed away on April 6, 1992, from complications due to HIV. He contracted the disease through a blood transfusion in 1983.

Today is also the birthday of historian John Hope Franklin, born in 1915 in Rentiesville, OK.

Franklin’s father, Buck, was an attorney. Buck wasn’t allowed to practice law in Louisiana because he was black. Instead, Buck moved his family to Oklahoma.

After living in Rentiesville, the Franklins moved to Tulsa. It was there that an 11-year-old John Hope heard W. E. B. DuBois speak. John Hope credited that experience with helping set the course for his life.

John Hope graduated valedictorian of Tulsa’s Booker T. Washington High School. The University of Oklahoma barred him entry because of his race. He instead enrolled at Fisk University in Nashville, where he graduated in 1935. He then earned a master’s degree and a Ph.D. from Harvard.

In 1940 he married Aurelia Whittington, a union that lasted 59 years.

John Hope published his first book, “The Free Negro in North Carolina, 1790-1860,” in 1943. And in 1947 he published “From Slavery to Freedom: A History of African-Americans.” Today the book has sold over three million copies.

John Hope also taught at many colleges and universities, including Howard University, Cambridge, and Cornell.

He was at Brooklyn College in 1956 when he became the head of that school’s history department. This made John Hope the first black academic to become a department head at a mostly white college.

Over the course of his life, John Hope Franklin broke many barriers. This includes becoming the first African-American leader of the American Historical Association and the first black professor to hold an endowed chair at Duke University.

John Hope worked with Thurgood Marshall on the landmark Brown v. Board of Education case. And he marched with Martin Luther King, Jr. President Bill Clinton awarded John Hope the Presidential Medal of Freedom in 1995.

Also born today, in 1921, was children’s author Jan Slepian. Slepian worked as a speech therapist before launching her writing career in 1962.

Slepian’s best-known work may be “The Alfred Summer” (1980). It tells the story of a boy with cerebral palsy befriending a mentally challenged boy. She published 28 books in all, including a poetry collection which she produced in 2015 when she was 94.

And today is writer Robert Nathan’s birthday. Nathan wrote over 50 books of prose and poetry. His 1940 novel, “Portrait of Jennie,” became a film, as did his book, “The Bishop’s Wife.”

The film version of “The Bishop’s Wife” starred Cary Grant. A 1996 remake of the movie, titled “The Preacher’s Wife,” featured Whitney Houston and Denzel Washington.

In total, five Nathan books became movies. His final novel was “Heaven and Hell and the Megas Factor,” published in 1975.

Robert Nathan said, “I’ve come to believe that art is communication informing man of his own dignity, and of the value of his life, whether in joy or grief, whether in laughter or indignation, beauty or terror.”