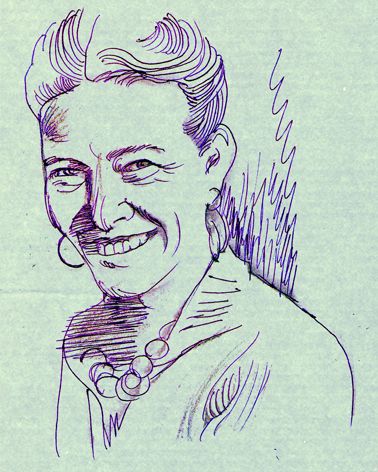 Poets’ and writers’ birthdays for today, Jan. 9, include William Meredith, Lizette Woodworth Reese, Simone de Beauvoir, and Walter Brooks. You’ll find today’s poem, Reese’s “A Violin at Dusk,” below. Thank you for reading and for sharing Bidwell Hollow with others.

Today is also the birthday of writer and philosopher Simone de Beauvoir. She was born in 1908 in Paris. 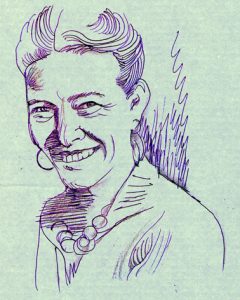 They started a magazine together in 1945, “Le Temps modernes.” Both were existentialists who believed you could derive meaning by studying the individual.

De Beauvoir decided when she was a teenager that she wanted to be a writer. As an adult, she produced many works, from novels to essays and autobiographies.

Most known to American audiences is De Beauvoir’s “The Second Sex” (“Le Deuxième Sexe”). Published in 1949, the book is often referred to as a foundation for feminism. In it, De Beauvoir argues that men had long oppressed women.

De Beauvoir wrote, “No one is more arrogant toward women, more aggressive or scornful, than the man who is anxious about his virility.” And, “If so few female geniuses are found in history, it is because society denies them any means of expression.”

An English translation of “Le Deuxième Sexe” published as “The Second Sex” in 1954. A retired zoologist named H. M. Parshley conducted the translation. He left out much of De Beauvoir’s original transcript.

But a revised second edition released in 2010. The newer version, translated by Constance Borde and Sheila Malovany-Chevallier, restored much of what Parshley cut.

Today is the birthday of Pulitzer Prize-winning poet William Meredith.

Meredith graduated from Princeton University with a bachelor’s degree in English. He wrote his senior thesis on Robert Frost.

After college, Meredith worked as a copy boy for The New York Times until World War II broke out. He then enlisted in the U.S. Army. He served in the Army’s Air Force, and then as a pilot for the U.S. Navy.

The poet returned to the Navy during the Korean War. Meredith then joined the faculty at Connecticut College in 1954. He published four collections of poetry between 1958 and 1980. He served as U.S. poet laureate from 1978-1980.

In 1983 Meredith suffered a stroke that robbed him of his ability to communicate. He resigned his teaching position. But through therapy, he regained his ability to produce language. And in 1987 Meredith released “Partial Accounts: New and Selected Poems.” The collection won the 1988 Pulitzer Prize for Poetry.

Meredith’s partner of 37 years, Richard Harteis, published a memoir, “Marathon” (2002) about their lives together. A film based on the book released in 2008, one year after Meredith’s death.

Also born today, in 1886 in Rome, NY was a man who gave the world a talking horse. The man was Walter Brooks. The horse was Mister Ed.

At 25 Brooks worked in advertising in Utica, NY when he decided to retire. It’s believed he inherited some money.

Brooks then began to write. He published his first piece, a children’s story titled “Haunted,” in Century magazine in 1915.

But it may be Brooks’s stories about a talking horse that may be his most recognizable work today.

Brooks first story featuring the horse, Mister Ed, was “The Talking Horse.” It appeared in the Sep. 18, 1937 issue of Liberty magazine. Brooks published 25 Mister Ed stories in magazines such as Liberty, The Saturday Evening Post, and Argosy.

The stories were the basis for the 1960s TV show “Mister Ed,” starring Alan Young. The show aired on CBS from 1961-1966. Every episode included a credit to Walter Brooks.

And today is the birthday of schoolteacher and poet Lizette Woodworth Reese.

Reese and her twin sister, Sophia, were born in Huntington, MD in 1856. Their father was a Welsh immigrant and their mother from Germany.

Reese graduated high school in 1873. She then became a schoolteacher, beginning a career that lasted 48 years. About teaching, she said, “In passing a public school building, every American citizen should feel like uncovering his head, in salute to those within who are spending their span of years in the nobilities and sacrifices of this spacious, most ancient of professions.”

Altogether Reese published 13 books of poetry, along with poems in many magazines. She served as Maryland’s poet laureate in 1931.

Of Reese in 1987 The Baltimore Sun wrote, “Lizette Reese was hailed during her lifetime as one of the most distinguished poets in the country.”

A Violin at Dusk

Stumble to silence, all you uneasy things,
That pack the day with bluster and with fret.
For here is music at each window set;
Here is a cup which drips with all the springs
That ever bud a cowslip flower; a roof
To shelter till the argent weathers break;
A candle with enough of light to make
My courage bright against each dark reproof.
A hand’s width of clear gold, unraveled out
The rosy sky, the little moon appears;
As they were splashed upon the paling red,
Vast, blurred, the village poplars lift about.
I think of young, lost things: of lilacs; tears;
I think of an old neighbor, long since dead.