Today is Monday, March 26, 2018. It’s the birthday of poets Robert Frost and A. E. Housman. And it’s the birthday of playwright Tennessee Williams. Our poem for today comes from Frost. It’s titled, “To the Thawing Wind.” Thank you for reading, and sharing, Bidwell Hollow. Let’s make this day a good one for ourselves and those around us.

It’s hard to imagine what Robert Frost’s (affiliate link) poetry would have been without New England. But had his father not died when Frost was 11, it’s possible the poet-to-be would have grown up in California. 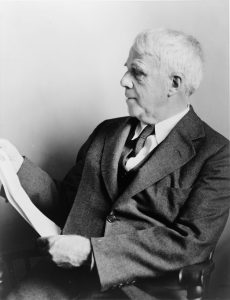 Described by critic Louis Untermeyer in “Modern American Poetry” as “the chief interpreter of New England,” Frost was born today in San Francisco in 1874. After his father died of tuberculosis, Frost moved with his mother and younger sister to Lawrence, MA.

For 27 years Frost lived in New England before taking his wife and four kids with him to England in 1912. There Frost delivered the collections “A Boy’s Will” and “North of Boston.”

The books contained now-famous Frost poems such as “My November Guest” and “Mending Wall.”

Frost was a famous poet by the time he returned to the States in 1915. And from there his reputation only grew.

President-elect John F. Kennedy in 1961 asked Frost to recite a poem at his inauguration. The poet wrote for the occasion an original piece titled, “Dedication.”

But the glare of the sun reflecting off the snow-covered ground made it impossible for Frost to read “Dedication.” And so he recited from memory his poem, “The Greatest Gift.”

Tennessee Williams (affiliate link) staged his first play, “Beauty is the Word,” while a student at the University of Missouri. Shortly after, in 1932, his father forced Williams to quit school and take a job in the shoe factory that he managed in St. Louis. 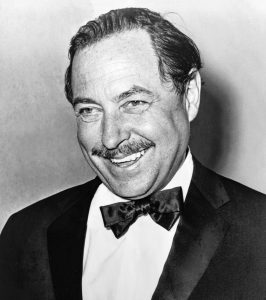 By 1937, though, Williams had staged two plays in St. Louis. He then headed to the University of Iowa, from which he graduated in 1938.

To meet the eligibility requirements for a writing contest in New York City, Williams changed his birth year. He also turned his birth name from Tom to Tennessee.

Williams, born today in 1911 in Columbus, MS, won $100 in the contest. And from then on he was Tennessee Williams.

“The Glass Menagerie” was Williams’ first big theatrical hit. It opened in Chicago in 1944, moving to Broadway the following year.

He followed that with “A Streetcar Named Desire,” which debuted in 1947. The play netted Williams his first Pulitzer Prize. A movie version of the drama released in 1951, starring Vivien Leigh and Marlon Brando.

Williams won his second Pulitzer in 1955 for “Cat on a Hot Tin Roof.” It’s about the relationships of a wealthy Southerner and his family.

Along with his many plays, Williams wrote poetry, short stories, two novels, and an autobiography. He passed away in New York City in 1983.

It’s the birthday of a man who considered himself more a specialist in Latin than a poet. That’s A. E. Housman (affiliate link), born in Fockbury, England, in 1859. 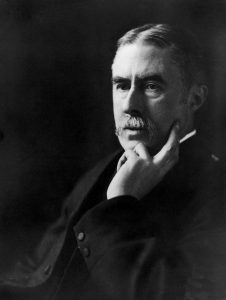 Housman became a Latin professor at Oxford in 1892. It was there that Housman wrote his first poetry collection, “A Shropshire Lad.” The title published in 1896. It gained in popularity over the first few years, setting Housman’s next book up for success.

But Housman’s most extensive work was producing an annotated edition of writings by the Roman poet Marcus Manilius. Housman spent 27 years on the project.

Collections of Housman’s poetry continued to publish in the decade following his death in 1936.

“To the Thawing Wind”

Bring the singer, bring the nester;

Give the buried flower a dream;

Find the brown beneath the white;

But whate’er you do tonight,

Bathe my window, make it flow,

Melt it as the ice will go;

Melt the glass and leave the sticks

Burst into my narrow stall;

Swing the picture on the wall;

Scatter poems on the floor;

Turn the poet out of door.