It’s the birthday of a writer who uses science fiction and fantasy to address topics considered to be taboo or controversial. That’s Samuel Ray Delany (affiliate link), born April 1 in New York City in 1942. 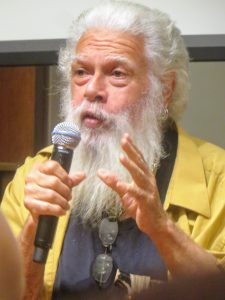 Delany is the author of many books, starting with his first, “The Jewels of Aptor,” which published in 1962. For the rest of the Sixties, Delany published at last one novel a year.

It’s his 1967 title, “The Einstein Intersection,” that first won Delany popular recognition. The book netted Delany his first Nebula Award. And it touched on issues of sexual identity, a theme the writer would explore more in his later work.

In “Dhalgren,” released in 1975, Delany features a bisexual male in a city that’s suffered a major catastrophe. His 1976 novel, “Triton,” features a character who undergoes gender reassignment.

And in his Nèverÿon series, Delany takes on modern issues such as AIDS. The set comprises four books, published between 1979 and 1987.

Along with his fiction, Delany’s produced some works of nonfiction, including a book about writing.

Being the child of two schoolteachers, Augusta Baker developed a love for reading when she was young.

At 16, Baker graduated from the all-black high school where her father taught. She started college at the University of Pittsburgh. But after her sophomore year, she transferred to the New York College for Teachers in Albany, NY.

Baker earned two degrees from the school, graduating in 1934.

After teaching for three years, Baker became a children’s librarian. She worked at what was then called the 135th Street Branch of the New York Public Library. The branch, located in Harlem, is now named after poet Countee Cullen.

Baker realized there weren’t many children’s books that featured black characters. And so she identified works that presented positive black role models for children.

Baker’s effort led to the creation of the James Weldon Johnson Memorial Collection of Children’s Books. And in 1957 she published a bibliography of the collection. The catalog contained hundreds of titles.

In 1961, Baker became the coordinator for children’s services for all New York Public Libraries. And, later, she served as an advisor to Sesame Street.”

Baker was born tomorrow in 1911 in Baltimore, MD. She ended her career at the University of South Carolina. There she served as storyteller-in-residence from 1980-1994.

April 1, 2018, is the Easter holiday for Christians. And it’s April Fools’ Day for pranksters. The last time Easter and April Fools’ fell on the same day was 1956.

The lunar cycle determines when Passover occurs. So the holiday moves each year. And because Easter’s based on when Passover falls, Easter also changes every year.

How rare is it for April Fools’ and Easter to fall on the same day? This year will be the 12th time it’s happened since 1700.

“Song of a Second April”

April this year, not otherwise

Than April of a year ago,

Is full of whispers, full of sighs,

Of dazzling mud and dingy snow;

Hepaticas that pleased you so

Are here again, and butterflies.

There rings a hammering all day,

And shingles lie about the doors;

In orchards near and far away

The grey wood-pecker taps and bores;

The men are merry at their chores,

And children earnest at their play.

Among the mullein stalks the sheep

Go up the hillside in the sun,

You that alone I cared to keep.